As Halloween approaches, we thought it would be fun to highlight one of the mysterious creatures of the deep… Vampire Squid! These creepy creatures are rarely seen, super fascinating, and sure to help get you in the beachy Halloween spirit! Don’t forget to include your kids, they’ll love learning about this odd dude!

Although you won't come across any Vampire Squid during your Topsail Island vacation, that doesn't mean there aren't plenty of other fun and exciting things to explore! Book your Topsail Island beach rental today and be on your way to making memories with your family.

What Exactly Is a Vampire Squid?

Where Do They Live?

Found in Tropical waters all around the world, Vampire Squid thrive in environments with very low oxygen levels. Vampire Squid are able to absorb and use oxygen very efficiently, much more than any other cephalopod. This means that they live extremely deep below the ocean's surface, about 3,000 feet below, and due to that, they have very little predators to worry about. Most marine animals cannot survive in such tough conditions, but deep, dark, and cold is what the Vampire Squid's all about!

Vampire squid have huge, clear eyes (the largest eyes in the entire animal kingdom in proportion to their size!) that appear blue due to the oceans water. Sensing things is no problem for the Vampire Squid due to its two tentacles that have receptors on the ends. These tentacles can extend out eight times the length of this creepy creature! Probably their most notable characteristic is their cloak or cape. If the Vampire Squid feels threatened, it can basically flip itself inside out by reaching its tentacles up over its neck and head, called cloaking. Essentially, they wrap themselves up in their own little blanket! Pretty neat, right?

Check out the video below of a Vampire Squid cloaking himself!

What Is Their Superpower?

As mentioned above, being able to cloak themselves is pretty awesome! However, Vampire Squid have another really cool defense mechanism, and that is bioluminescence! Their bodies are covered with organs that produce light, called photophores. The Vampire Squid is able to produce a special mucus on the tips of their tentacles that cause them to glow!

Glowing is amazing, but did you know that Vampire Squid can regrow lost appendages? If it happens to lose an arm due to a predator or whatever else, it just regrows a new one!

What Do They Eat?

Vampire Squid are not able to catch and eat live meals, so they feed on whatever's drifting through the water, which is dead bits and pieces of other marine life. When they Vampire Squid is hungry, those two long extendable tentacles come in handy! They extend them out, feel for food, and release a sticky mucus that traps the food onto the tentacles. They then encapsulate the food particles with their special mucus, slowly move it towards its mouth, and finally eat it.

Did you love learning about this haunting creature of the deep? We hope so! The ocean is filled with wonderful creatures, just waiting to be explored and discovered. Topsail Island is the perfect place to come relax, explore, and refresh, so give us a call at 800-497-5463 or click here to start a custom rental search.

We hope your family has a safe, fun, and spooky Halloween! 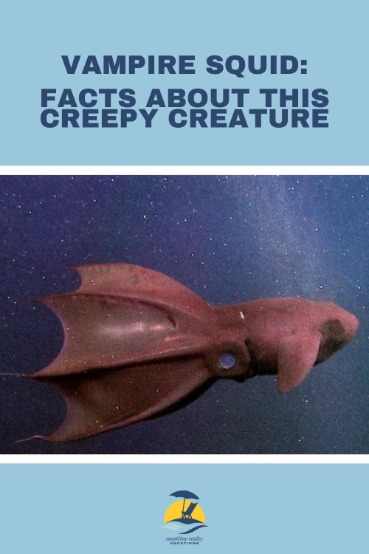 Click below to learn 10 interesting facts about the ocean!