Explore the Wonderful Lighthouses of NC 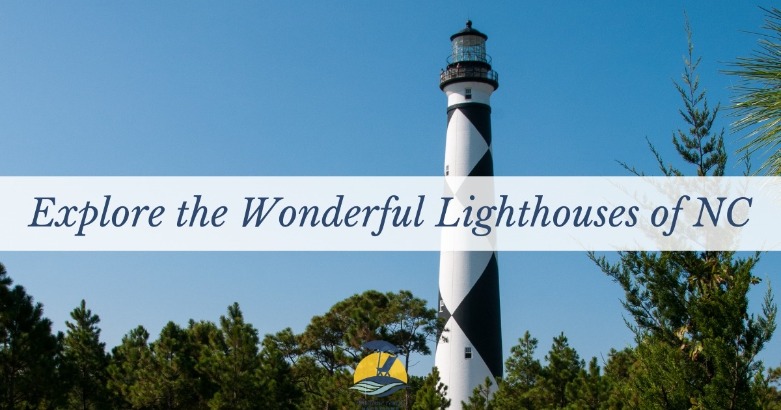 When you think of the beach, many things come to mind, but perhaps a lighthouse is one of them. North Carolina happens to have 7 beautiful lighthouses that are still standing and today we will walk you through the history of the beacons of light that call our great state home.

Built in 1875 between the Cape Henry and Bodie Island lighthouses, the Currituck Beach Lighthouse is one of the only American lighthouses that still has its original Fresnal lens (helps concentrate the narrow beam). The light still flashes every 20 seconds from dusk to dawn and can be seen for 18 nautical miles. It is 1626 feet tall, contains 220 steps, and is open to the public most of the year.

Standing tall on the northern end of the Cape Hatteras National Seashore, the Bodie Island Lighthouse was built in 1872, however it is not the original lighthouse to the area. Two other lighthouses were first constructed on Pea Island. The first was destroyed to improper construction and the second was destroyed during the Civil War. Cape Hatteras was chosen as the location for the lighthouse standing today and it received electricity in 1932, no longer requiring fire. The lighthouse was most recently restored in 2013, still lights up every night, is 156 feet tall, and is open to visitors.

Ever heard of the Graveyard of the Atlantic? Built in 1870, the Cape Hatteras Lighthouse shines bright for this treacherous area of the ocean where the Gulf Stream and Virginia Drift meet and form very dangerous waters. It is situated in the middle of Cape Hatteras National Seashore. Another lighthouse once stood in its place, built in 1803, but it was too short and ineffective. Height was added to the lighthouse, but due to extensive needed repairs, construction started on the new (current) lighthouse in 1868. The current lighthouse was first lit in 1870 and received its iconic black and white stripe swirled pattern paint job in 1873. Fun fact: the Cape Hatteras Lighthouse is the tallest brick lighthouse in America at 198.49 feet with 269 steps. Due to beach erosion, the lighthouse was decommissioned in 1935, moved in 1937 to the National Park Service, and again moved in 1999 to its current home. The Cape Hatteras Lighthouse is not currently allowing climbing due to ongoing restoration, but there is a virtual climb experience available.

Built in 1958, the Oak Island Lighthouse is much newer than the rest of the state's lighthouses. It is 153 feet tall and does not have a typical spiral staircase. Instead, it has multiple ship ladders totaling 131 steps up to the lantern. Due to the construction method used, the concrete needed to be poured continuously, so a concrete plant was set up on-site that allowed 24/7 construction. The three-stripe pattern was permanently set into the concrete using different mixtures of concrete. The Marine Corps used a helicopter to install the lantern portion. The Oak Island Lighthouse flash pattern is four one-second flashes every ten seconds. Tours are available year-round and you can climb to the top.

Loved for its patchwork look, the Old Baldy Lighthouse has been lighting up Bald Head Island since its completion in 1817 and is the oldest standing lighthouse in North Carolina. It is not the original lighthouse to the area however, the original lighthouse was completed in 1794, but later replaced by Old Baldy. It is 110 feet tall and has 108 steps. The lighthouse was originally white, but developed its current patchwork look from being patched up over the years. In 1935, Old Baldy was decommissioned. Fun Fact: The government used the lighthouse in World War II as a radio beacon! Old Baldy was re-lit in 1988, although it is no longer used for navigational purposes. The lighthouse is open to the public and you can climb to the top.

Does all this lighthouse talk have you ready for a beach trip? Although we don't have our own lighthouse, Topsail Island is rich in history and loaded with plenty of fun to be had by all. If you're ready to plan your Topsail Island beach vacation and explore the area for yourself, click here to view our available rentals. We think you'll love what you discover! 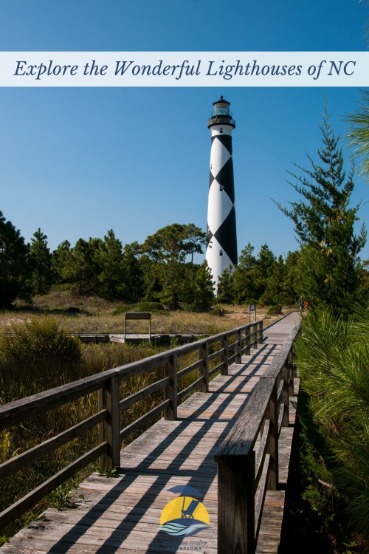 VACATIONING WITH FRIENDS OR FAMILY?